Over at the Well, Anna Gissing reminds us of “the reason(s) for the season” of Epiphany.  After the last month and half’s blogging hiatus, I thought I too would try to get this party started again with an Epiphany-inspired post from my old blog on a powerful Gospel text:

Daniel Boyarin, Professor of Talmudic Cultures, Departments of Near Eastern Studies and Rhetoric, at University of California, Berkeley

In my very first seminar at Duke–a course with Richard Hays studying the New Testament’s use of the Old Testament–we read and discussed an extremely stimulating article by the Jewish scholar Daniel Boyarin of UC Berkeley, “The Gospel of the Memra: Jewish Binitarianism and the Prologue to John” (Harvard Theological Review, 94:3 [2001] 242-84).  Boyarin argues against the common assumption that the lo,goj theology of Fourth Gospel’s prologue represents an adoption of strictly Greek categories of thought and a consequent break with Jewish monotheism.  On the contrary, the  lo,goj theology found in the John 1 was actually very much at home in first century Jewish thought about God.

To support his thesis, Boyarin adduces numerous passages from Jewish writings parallel to John’s line of thought.  Take for instance the follwing passage from the Jewish philosopher Philo:

To His Word, His chief messenger, highest in age and honour, the Father of all has given the special prerogative, to stand on the border and separate the creature from the Creator.  This same Word both pleads with the immortal as suppliant for afflicted mortality and acts as ambassador of the ruler to the subject.  He glories in this prerogative and proudly describes it in these words “and I stood between the Lord and you” (Deut. v. 5), that is neither uncreated by God, nor created as you, but midway between the two extremes, a surety to both sides. (Quis rerum divinarum heres sit 205-206)

Boyarin comments on this and other passages from Philo,

Philo oscillates on the point of the ambiguity between separate existence of the Logos, God’s Son, and its total incorporation within the godhead.  If Philo is not on the road to Damascus here, he is surely on a way that leads to Nicaea and the controversies over the second person of the Trinity. (p. 251)

He moves from discussing Philo’s lo,goj theology to limning rabbinic and para-rabbinic notions of “The Memra” or “The Word” of God.  Much ancient Jewish literature ascribes actions, thoughts, intentions and relations to the Memra along with divine status while nevertheless speaking of the Memra as in some way distinct from God.  Boyarin argues that this ancient language about the Memra cannot be read as mere personifications of impersonal divine attributes.  Rather “the strongest reading of the Memra is that it is not a mere name, but an actual divine entity, or mediator.” (p. 255)

He further argues that the Jewish Memra should be seen as at least analogous or cognate, if not as identical with, Jewish and Christian notions about the lo,goj and/or Wisdom.  In the Targumim the Memra performs many of the same functions as the lo,goj:

In light of this evidence, it would seem that Johannine prologue’s references to the lo,goj are well within the bounds of what could count as first century Jewish monotheism and not the divisive Christian innovation that they are often alleged to be.

To my mind, Boyarin cements his argument when he simultaneously re-reads the prologue of John’s Gospel as a midrash on Genesis 1 and juxtaposes the strophes of the prologue with parallels from Jewish lo,goj/Wisdom/Memra theology.  For example, Wisdom, like John’s lo,goj is present with God and participates in the Creation:

Genesis 1:1 In the beginning, God created the heavens and the earth…

Similarly, when John writes “He was in the world, and the world was made through him, yet the world did not know him.  He came to his own, and his own people did not receive him,” (1:10-11) he is not yet describing the Incarnation and ministry of Jesus but is rather rehearsing a common piece of Jewish lore about Wisdom.  Thus we read in 1 Enoch 42:1-2,

Wisdom could not find a place in which she could dwell; but a place was found (for her) in the heavens.  Then Wisdom went out to dwell with the children of the people, but she found no dwelling place.  So Wisdom returned to her place and she settled permanently among the angels.

In light of these parallels, Boyarin argues, it is simply false to think that the first chapter of John’s Gospel would have offended first century Jews by positing a second person within the godhead.  Such a notion was already the common stock and trade of Jewish Wisdom theology.

Is there, then, anything distinctively Christian about John 1?  Of course, says Boyarin, but it does not come until verse 14: “And the Word (lo,goj) became flesh and dwelt among us….” 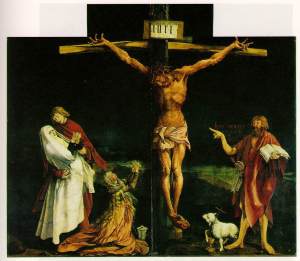 The Isenheim Crucifixion by Matthias Grünewald (1515)

Overall, I find Boyarin’s arguments to be quite helpful in understanding the emergence of the Christian doctrine of the Trinity.  This traditional Christian doctrine is not at all a sharp, alien, Greco-Roman departure from the Israelite and Jewish religion(s) from which Christianity initially emerged.  Rather, Trinitarian thought is quite at home within ancient Jewish conceptions of the divine.  It is, rather, precisely when Greek notions about the divine nature become normative that Trinitarian thought becomes a difficult doctrine.  This point has also been made recently by the Christian scholar Richard Bauckham in his book God Crucified (2008).

Viewed from a first century Jewish perspective, the challenging thing about Christianity is not that the lo,goj is both God and with God, is a second divine person within the godhead.  It is not that Christian ideas about the lo,goj threaten Jewish monotheism.  They don’t.  It is rather that according to John and all those who believe that his testimony is true the lo,goj became flesh and dwelt and died among us….