A Letter (to Ed McClanahan)

Dear Ed,
I dreamed that you and I were sent to Hell.
The place we went to was not fiery
or cold, was not Dante’s Hell or Milton’s,
but was, even so, as true a Hell as any.
It was a place unalterably public
in which crowds of people were rushing
in weary frenzy this way and that,
as when classes change in a university
or at quitting time in a city street,
except that this place was wider far
than we could see, and the crowd as large
as the place. In that crowd every one
was alone. Every one was hurrying.
Nobody was sitting down. Nobody
was standing around. All were rushing
so uniformly frantic, that to average them
would have stood them still. It was a place
deeply disturbed. We thought, you and I,
that we might get across and come out
on the other side, if we stayed together,
only if we stayed together. The other side
would be a clear day in a place we would know.
We joined hands and hurried along,
snatching each other through small openings
in the throng. But the place was full
of dire distractions, dire satisfactions.
We were torn apart, and I found you
breakfasting upon a huge fried egg.
I snatched you away: “Ed! Come on!”
And then, still susceptible, I met
a lady whose luster no hell could dim.
She took all my thought. But then,
in the midst of my delight, my fear
returned: “Oh! Damn it all! Where’s Ed?”
I fled, searching, and found you again.
We went on together. How this ended
I do not know. I woke before it could end.
But, old friend, I want to tell you
how fine it was, what a durable
nucleus of joy it gave my fright
to force that horrid way with you, how
heavenly, let us say, in spite of Hell.
P.S.
Do you want to know why
you were distracted by an egg, and I
by a beautiful lady? That’s Hell.
— Wendell Berry, from Leavings: Poems, (Berkeley: Counterpoint Press, 2010)

To be quite honest, I was terrified of moving to New York. I suspected that by so doing I was voluntarily casting myself into Wendell Berry’s Hell: A frantic, distracted, overcrowded, and unalterably public place in which everyone was, nevertheless, all alone in the world. Social isolation is epidemic everywhere in the United States nowadays, but they call this town “the City of Lonely Hearts” for a reason. This is a city full of people who have left behind families, hometowns, home states, long-standing friendships—almost everything that keeps us rooted, stable and sane—in order to make it big, to climb the ladder, and to achieve our dreams. As a consequence, this is a city of incredibly high stakes, where relentless, torrential busyness subverts the forming of new meaningful relationships. Here everyone warns you that your first year in the city will be lonely and hard, and that in your second year you will just learn to cope.

Loneliness is a constant theme in my conversations with graduate and professional students here at NYU. Higher education is already an inherently and profoundly solitary endeavor. It involves reading, researching, studying, slaving over papers, working on dissertations, pulling all-nighters and the like all by oneself for days, weeks, months and years on end. The isolation is only made worse by the culture of intensely catty competitiveness that exists in most graduate school departments. Thus, for many graduate and professional students, the only people who understand what they are going through are either their bosses or their rivals. (There is a reason why mental health problems are rampant among graduate students.) At NYU all of these factors simply compound the difficulty of living in Berry’s Hell. 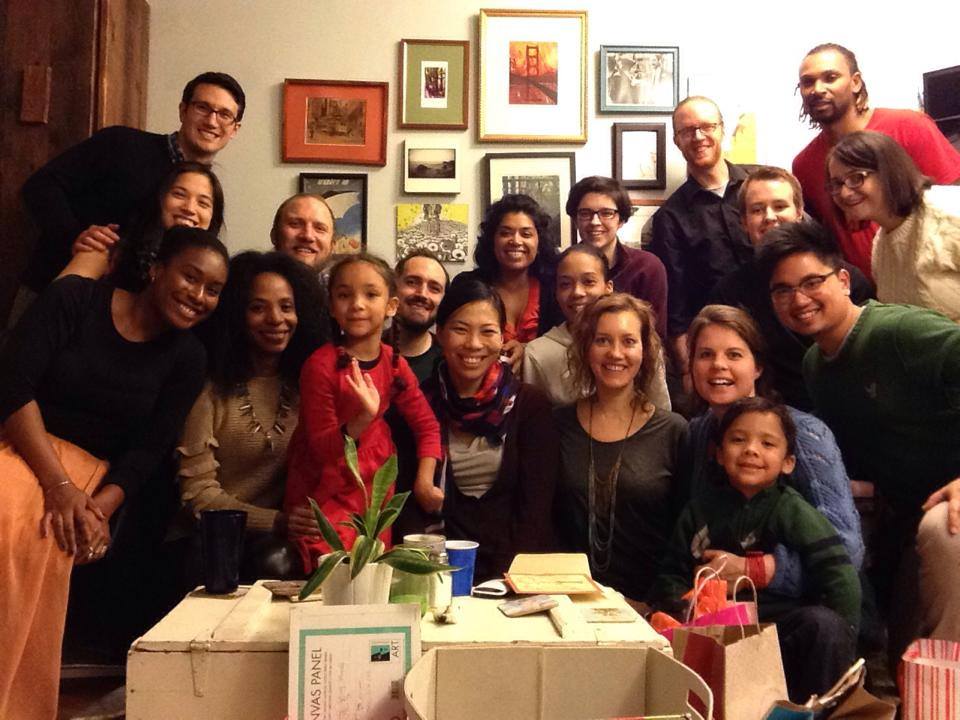 Some of the RL community at Christmas

Much to my surprise, my first few months in New York have not been as lonely as I thought they might be. To a large extent that is because I am newly and well married to my best friend in the world. That helps a lot, of course. But that’s not all. No single relationship can satisfy all of one’s social needs. We are profoundly social animals, in need of not just relationship but community—robust networks of people who are honestly and deeply invested in one another’s lives.

Radical Living is a Christ-centered cohousing community located in the Bedford-Stuyvesant neighborhood of Brooklyn, New York. We are a multicultural, intergenerational and ecumenical community of artists, workers and students that includes singles and families.

There are several households connected to Radical Living. All of the houses are located within a one-block radius of each other, and function as one community with a couple dozen members.

In essence we are dedicated to living a meditative, prophetic and prayerful life, centered in Christ, engaged in our neighborhood, concerned with social justice, and led by the Holy Spirit.

You can find out more here. Alissa has been a part of RL since its inception and we were very blessed to find an apartment on RL’s primary block (Hart Street, between Marcy and Nostrand Avenues). When I first moved up here the RL community graciously housed me in their hospitality room while Alissa and I prepared for the wedding and looked for our future home. From very early on I found that there were people here who were rooting for me and were here for me. Whatever challenges I have faced in coming to this city, being chronically alone has not been one of them, and that has made all the difference.

To my students, I hope that together we can forge such a supportive community for you—that we might be able to join hands and “force that horrid way” together. In my next post, I will share some reflections on what I have learned from my time in RL and other communities I have observed or participated in. Until then, let me encourage you to take someone you don’t know out for coffee. Odds are, they’re lonely too.